What is Buffer Overflow | A comprehensive guide 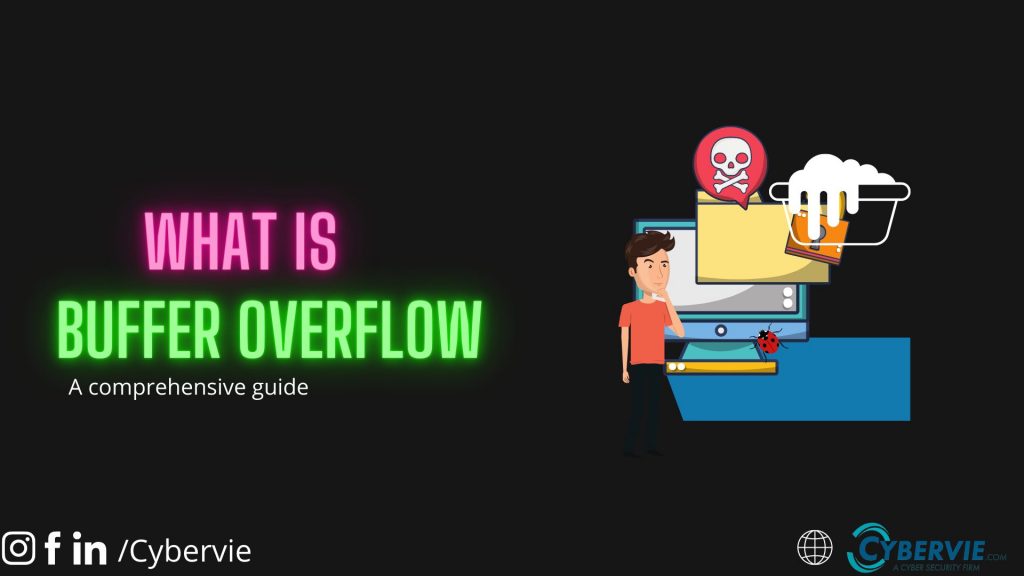 In this guide we are going to see and learn-

So let’s start with an introduction.

What is Buffer Overflow?

A buffer overflow is a condition when a program tries to put more data in a buffer than it could hold. A buffer can be anything, whether it is a character, strings, an array of integers. After the memory in the buffer is full you are writing outside the buffer which will crash the program, corrupt the code, or even can execute a malicious code. The extra information in the buffer will overflow into adjacent buffers and ultimately corrupt valid data which are present in them.

How does buffer overflow works?

It can be happen due to a programming mismanagement of the memory.

In Kernel command line parameters are contained which passes to the program and environment variables.

The last area Text contains the compiled code and is the only read-only area, where we can see the code.

Above the Text there is a Data which stores variables of the program.

On the top of the data there is a Heap this is the area where large objects are collected like images and files.

And stack is the area where the magic happens.

The exploitation of buffer overflow

So now we have knowledge of how the memory works, let’s see some example and see how a buffer overflow works and can be exploited

Let’s take the following sample of the C code.

Test run of the program!

Now let’s use the debugger and see what the program is actually doing. I am using GNU debugger GDB.

now we know the position of the variables, we can print it out

As we know that the data stored in ASCII format in the stack .

How to exploit this.

Now lets see how we can exploit this.

so here we have overflowed the buffer but only 35 letters are no useful and bring no change to the program let’s try it with 50+ characters and see what happens.

So we finally overflowed the buffer of givenname and it went straight to realname and matched the buffer for success. This is a basic buffer or stack overflow shown with a help of a program.

So, can we further exploit the program to cause more more damage. we already cracked the program now let’s see what more harm could it cause.

This buffer overflow vulnerability could be privilege escalate to gaining root access to the system with use of a shellcode exploit.

The exploit we are using here is to spawn a shell. compile this exploit as .asm file you can do this with tools like nasm.

Find yourself a perfect exploit by googling and searching and the buffer overflow vulnerability eventually lets you execute any type of code.

How to prevent Buffer Overflow.