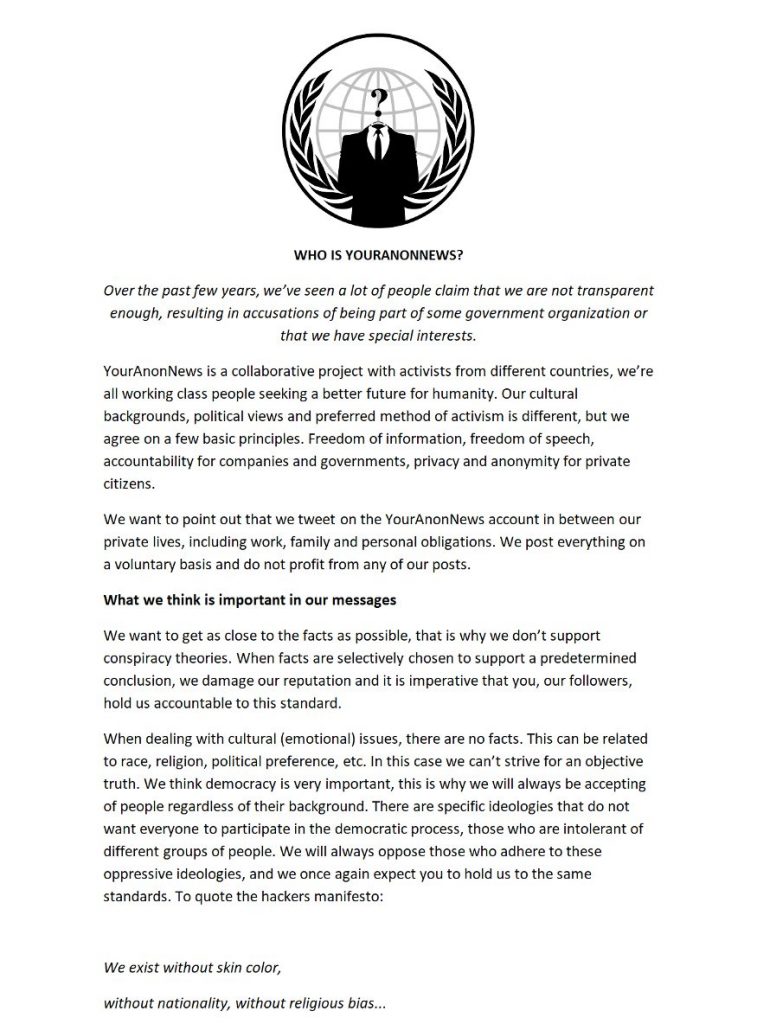 With the recent #BlackLivesProtest which happened in the USA after #GeorgeFloydKilling, this anonymous hacker’s group also became active on twitter and announced that it will make public, the instances of state apathy and wrongdoings of various celebrities.

WHO ARE THESE HACKER’S GROUP?

Anonymous is a hacker’s group that call them activists and are spread across the globe. They are not a formal organization, which follow some hierarchy, or structure. They identify themselves not as an organization but as an idea under which they send a political message to make the world a better place.

Anarchy has been their consistent theme, thus they have garnered a lot of support from the masses. Prior to making a move, they usually post a video message as a warning against the target organization. Their motto, “We are Anonymous. We are legion. We do not forgive, we do not forget. Expect us”, became popular signage of socio-political resistance. They advocate freedom of speech, individual privacy, and oppose censorship and surveillance.

Their first notable action was back in 2008 when they targeted the Church of Scientology for their corporate-like behaviour.

In 2010, they frequently targeted copyright protection groups. Their objective was to open up the internet and restrict the stifling of content consumption via copyrights, which Anonymous’s views as largely arbitrary.

In 2015, they posted a message condemning the Charlie Hebdo killings and their announcement stated that “We, Anonymous around the world, have decided to declare war on you[Al-Qaeda], the terrorists” and promises to avenge the killings by “shut[ting] down your accounts on all social networks.”

Also an offshoot of the group targeted the terror group ISIS-affiliated websites and social media handles.

Anonymous have also supported the cause of Julian Assange and vocally supported WikiLeaks. Anonymous’s direct attack on those who did not support WikiLeaks caused plenty of noise. They revealed private emails and other documents conspiring against Assange.

Anonymous’ DDoS attacks against PayPal are said to have cost the company over $5 million.

HAS THEIR LEADER BEEN CAUGHT?

Police had arrested several members allegedly belonging to the group and questioned them across the world. However, as the group is a decentralized one, they were unable to unearth all the members of the group. A person named Sabu Monsegur claimed himself as the group leader of Anonymous who had been arrested by the FBI. The group has posted that they do not have any leader also his actions do not match with the ideology of Anonymous.

After being active until 2016, their media profiles diminished. They have reemerged in 2020 with an attack on the UN’s website and had created a page for Taiwan, displaying its freedom flag. Taiwan does not have a seat in the UN as of now.

As a result of the #BlackLivesMatter protests spread across the US, the group again expressed their anguish. On 29th May, Anonymous published a video message on their Facebook page, as a warning to the Minneapolis Police Department for the deliberate killing of George Floyd in the USA. Along with that, on its social media platforms, Anonymous sounded the alarm on many public figures, stating that it will divulge proof of severe wrongdoing against these people.

The group has since allegedly taken down the Minneapolis Police Department’s website and has also released documents that appear to prove, among other things, the killing of Princess Diana by Britain’s royal family, and allegations of rape of a 13-year-old by now US president, Donald Trump.

Time magazine referred Anonymous as one of the “100 most influential people in the world” in 2012. Reports sometimes emerge that the group has changed their form of protest.

To read more about them, you can go to the following links:-