What is IoT Pentesting | Quick Guide to IoT Penetesting 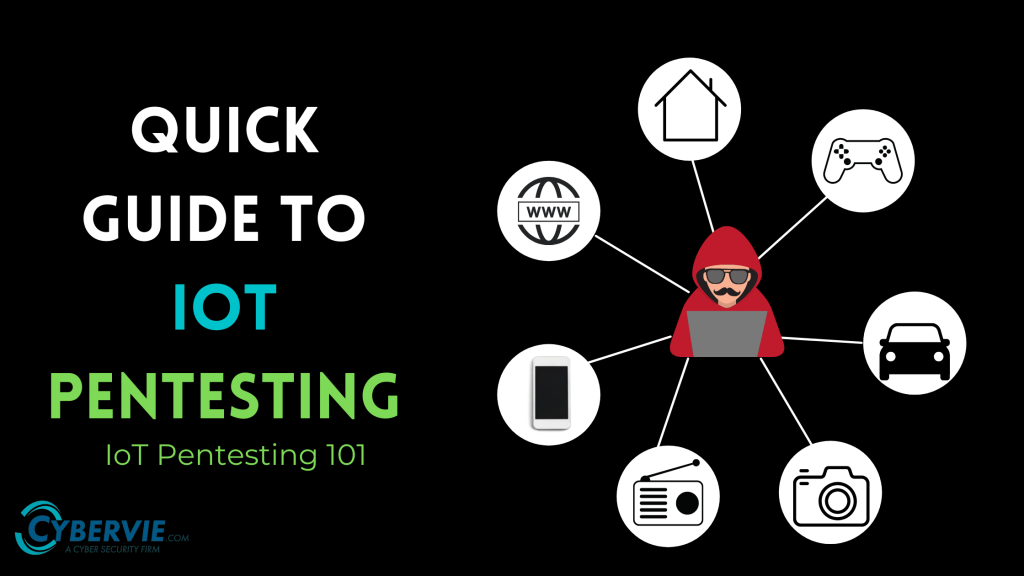 In this article, we are going to talk about IoT pentesting. Before starting the IoT Pentesting part first, let me introduce what IoT or Internet of Thing is.

“The Internet of things (IoT) describes the network of physical objects—a.k.a. “things”—that are embedded with sensors, software, and other technologies for the purpose of connecting and exchanging data with other devices and systems over the Internet.” – Wikipedia

According to surveys, there will be 55.7B IoT devices worldwide by the end of 2025. The huge no. of IoT devices will create a huge network of all the devices like self-driving cars, energy grids, smart appliances. The massive the network the massive the security risks. One has to constantly evaluate the IoT security Risks before it’s too late.

What is IoT Security?

Let’s see some famous IoT security issues happens in the past.

In the past Nest, devices are exploited by hackers. There was a Vulnerability in Nest Thermostat in which by holding a button for 10 seconds to reboot the device. At this stage, the device can be made to communicate with USB media, which contains malicious firmware. There are few more vulnerabilities that are discovered in Nest thermostats

The Jeep hack is the most popular one. Two security researchers Dr. Charlie Miller and Chris Valasek demonstrated in 2015 how they can remotely control and takeover a jeep using the vulnerability in the Uconnect system. This hack can lead 1.4 million vehicles to be remotely controlled from home. Basically, this was one of the most dangerous vulnerabilities in IoT devices at that time.

These are some of the past IoT security issues in some famous companies. There are lots of other hacks in past like Lifx Smart Bulb, Belkin Wemo home automation, Insulin Pump, Smart Door Locks, Even Smart Guns and Rifles. All these hacks are happens because of lack of security awareness among developers, lack of macro perespective, Usage of Insecure framework and third-party libraries.

These are the OWASP top 10 IoT

Now, we know what is IoT Security and what are IoT Vulnerabilities. The last thing we are going to discuss here is IoT pentesting methodology.

Explaining the whole pentesting methodology in-depth in one blog is not possible. So, we are going to discuss the methodology in a quick but effective way.

when the tester is creating architecture of the system, the entire architecture can be broadly divided into three categories:

Embedded devices can be used for several different purposes according to the situation. It can be a sensor that collects data, smart lightbulbs, switches, smart homes all are examples of embedded devices.

Some vulnerabilities in Embedded devices are:

Some Vulnerabilities related to them are:

Basically, radio communications provide a way to communicate with each other.

Some of the common radio protocols used in IoT are:

Some Vulnerabilities in Radio Communications are:

basically, these are the basics of attack surface mapping

As the name suggests, in this step the tester exploits all those vulnerabilities found in previous steps and tries to crack the IoT device. Again, there are hundreds of ways a hacker can exploit the target.

Some of them are:

The whole exploitation process cannot be described in one blog. so, these are the basic ways to exploit the device depending on vulnerabilities.

In this step the tester have to make a in-depth detailed report of all the technical and non-technical summary.

Also the tester have to give all the proof of concepts, demos, code snippet, everything they used in the process.

Sometimes the tester have to reassess the bug after they get patched up.

These are all the four steps in the methodology of IoT pentesting.

Best Practices to Protect the IoT

For more blogs like this check our blog page